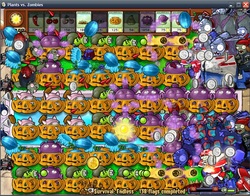 When it comes to casual games, it's hard not to be somewhat in awe of PopCap's ability to churn out consistently excellent, high-quality titles that are more addictive than an entire pharmacy full of designer pharmaceuticals. Bejeweled has sold something like 80 bajillion copies to date, and nothing crushes productivity in The Escapist's offices faster than a new version of Peggle. As well-done as these previous installments are, though, they ain't got nothing on PopCap's newest game, Plants vs. Zombies. The object of Plants vs. Zombies (PC, Mac) is simple: There's a zombie on your lawn. We don't want zombies on the lawn. Not only because the neighbors might point and stare, but also because if they make it all the way to your house, the zombies are going to come inside and eat your brains. Plants vs. Zombies is your basic tower defense game, with a wide variety of plants acting as the line of defense between your noggin and the shambling undead. You begin each round with a sneak peek at the zombies that are standing in the street, patiently awaiting their chance to jump the curb and make a beeline for your back door. You can then choose the plants you want to take into battle; certain plants are useless against certain zombies, so plan carefully. The most important resource in the game is sunshine. Each seed costs a certain amount of sun to plant; the more powerful the seed, the more sun it costs. Sunshine falls naturally from the sunny sky, but not in large enough quantities to do you much good - you'll have to plant Sunflowers to boost your sunlight-gathering abilities. Even if you've got plenty of sun, you need to be wise about how and when you plant. Seeds take a certain amount of time to recharge after planting, so relying too much on powerful seeds that take more time to recharge can leave you wide open and vulnerable. At first, you'll only have a handful of seeds at your disposal, but you earn a new seed at the end of each cleared level. You'll more than likely settle on a favorite combination of plants pretty early on, but Plants vs. Zombies does a great job of forcing you to reconsider your strategies. Sun isn't as readily available at night, for example, while the slope of the roof renders straight-shooting peas virtually useless. Wall-nuts that kept weaker zombies at bay are no match for pole vaulting or ladder zombies, and you can't plant much of anything in the pool without laying down a lily pad first. That said, Plants vs. Zombies certainly isn't the hardest tower defense game you'll ever play - seasoned players will probably beat Adventure Mode without ever once losing a round. There's still loads to do, even after you defeat the final boss, though. You can tend to the plants in your Zen Garden, which spit out money if you treat them well, or visit the Tree of Wisdom, which spits out advice if you treat it well. You can also test your skill at an assortment of mini-games, though some are definitely more fun than others. Invisighouls, which pits you against an army of invisible undead, is particularly challenging, as is Portal Kombat, but Slot Machine and Whack-a-Zombie are a bit weak. Oh, but you're not done yet. Once you've worked your way through all of those, there are still two puzzle modes to master: Vasebreaker, in which you have to protect your brains while smashing all the vases on the lawn and my personal favorite, I, Zombie, which lets you switch roles and play as the brain-munchers themselves. But wait, you're still not done! You still have two different survival modes to conquer for each of the game's five different environments and believe me, Hard is no picnic, even for experienced zombie slayers. Once you've done all that, you can play through the game for a second time, when your neighbor Crazy Dave chooses your first three seeds for you in each round. Not bad for just $20. Everything about Plants vs. Zombies is high-quality, start to finish; the music is excellent, the art is charming and adorable, and the game's sense of humor will really have you grinning. The notes the zombies leave are priceless, and even their descriptions in the Almanac are hilarious. Plants vs. Zombies is fun in concentrated form, an intense dose of giggle-inducing entertainment beamed directly to your brain.
DOWNLOAD
your game station